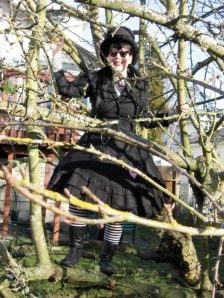 Writer and friend of trees Marly Youmans sent along the link to a newish tumblelog called Goths up trees. Located at gothsuptrees.net, it consists entirely of user-submitted photos of — wait for it — goths up trees.

Well, not quite entirely. What sets Goths up trees apart from the hundreds of other very narrowly focused Tumblr sites is the author’s commentary, which is pitch-perfect and generally hilarious. Take, for example, the post containing the above photo (which I nicked without permission because hey, it’s Tumblr — that’s what you do):

This was submitted by GothicCharmSchool with the comment “Jilian Venters from Gothic Charm School, exploring her backyard.”

She’s very well dressed for tree exploring. Bonus points for maximum skin coverage with the hat and sunglasses. Some gloves would have completed the look but we can’t have everything. This is probably the happiest up-tree Goth I’ve ever seen. Was she drunk? Was she trying to reach a pair of boots that she had coveted for years that mysteriously appeared in the tree IN HER SIZE? Did someone lure her up there with the promise of a new corset tailor made just for her (I’ve fallen for that one before)? Was the author of a certain popular vampire romance novel stuck up the tree unable to move and in poking distance? I’m going with all of the above. She’s just that happy.

For more — much more — like this, check out the site.